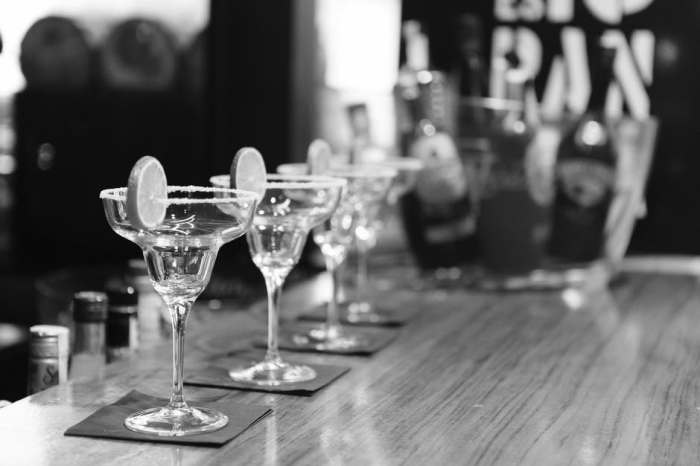 It’s hard to sit down and start to write something without a goal. I’ve been doing a lot of living and thinking lately – I mean, that’s kind of what people tend to do ­– but I’ve felt this creeping compulsion to write recently, and I think it’s something I’m supposed to be doing, regardless of whether what ends up on the page has a tidy beginning, middle, and end. I have to start somewhere, so deep breath, here goes:

Actually, that’s a little heavy, a little scary, and it’s probably not good to start out a blog post the way I’ve been starting my afternoon meetings: “Hi, I’m Bryan, and I’m an alcoholic.” Especially when I’m not sure I am (that’s what’s called “first stepping”). I’m getting self-conscious, so can we please take a step back, talk about something a little normal? Let’s try this again:

I was driving with Becky the other day.

Since I last wrote anything other than a work assignment, I got married – we got married. We spend a lot of time driving together, mainly as a consequence of this arrangement: if the whole of marriage is greater than the sum of its parts, triply so for the errands. These include groceries, events for Becky’s ministry with InterVarsity, family gatherings, the increasingly less rare date night, returning a DVD to Redbox that’s been sitting on our coffee table unwatched and covered with various art projects and mail and unused napkins from dinner – that sort of thing.

We were driving, and Becky started talking about my sense of humor. She thinks that I’m funny, and she’s not a great actress so I know it’s true, but I can tell that she’s often concerned by how other people will take it, especially when I rely on nihilism and cynicism. This time, she mentioned a specific friend of ours who seems to know when I’m joking but not exactly how, then she told me this person’s Meyers-Briggs specification that was supposed to indicate the foundation of their disorientation. (Becky tells me I’m an INTJ, which a quick internet search reveals I have in common with great names like Nikola Tesla, Martin Luther, John Adams, Christopher Hitchens, and Ted Kaczynski.)

It’s boring stuff, for sure, the things I find funny and riff on. Particularly on social media and among friends, my humor tends to center around the absurdity of societal norms and power structures. I know how silly it is to protest against the inhumanity and enormity of small business bathrooms lacking two-ply toilet paper, and I know that an equal amount of Republicans and Democrats have problem finding a rhythm; but when many real issues and inequities are already being addressed by those wiser and more adept than I am, I have to find my own hills to plant my flags on. I’m not maligning “political correctness” (I think to do so is uncompassionate – why shouldn’t we want to take steps to make sure people feel safe and comfortable?), but I find the world a preposterous place, and the way we react to it is equally absurd.

Becky (kindly, I might add) said that she thinks some people, including our aforementioned friend, would find this interesting. And that’s a new thing to me, the idea that anyone would find me interesting or worthwhile, even my own wife. I spent far too many wasted years (because I’m 31 and really old now) with what our pastor Ed Crenshaw calls “head trash”: wrong thinking that leads to wrong action or inaction. Please, God, don’t let this turn into a religious blog, but in the Bible, Jesus says “Now that you know these things, God will bless you for doing them.” I honestly didn’t know that my life was utterly inundated with wrong thinking.

I could go down the neon spiral rabbit trail and figure out where it started, but that’s why I pay for psychotherapy. I can say this, though: the head trash, the wrong thinking, was characterized by multitudes of selfish ungraciousness that certainly wasn’t unique to me. I felt worthless and unlovable, scared to be known and afraid that I’d die unknown, weak, unmerited, humiliated but not particularly humble, and yeah, totally uninteresting. To borrow a line from one of the other gospels, written by Jimmy Eat World: “I can’t compete with the clear eyes of strangers. I’m more and more replaced by my friends each night.” That’s a good word. That was my attitude every day. (As a side-note, my friends are all still way cooler than I am, but I’m all right with it.)

See, the thing about alcohol is, it’s actually a fantastic crutch. If you’re depressed dealing with head trash and want to get numb, I truly cannot recommend it enough. It’s great at dulling feelings and lowering inhibitions. The trick is, you can’t just use it when you’re out with friends, because it blurs the distinction between what’s actually enjoyable and what’s sort of mundane, and when that’s your baseline, everything’s pretty cool. Here’s what you have to do to get the best mileage out of that bottom-shelf plastic bottle of rum that costs $17.27 with tax added and announces “World Famous” on the label, in half the steps of Alcoholics Anonymous:

Still with me? Here’s a Cliff’s Notes recap: suffered with clinical depression, experienced a handful of undisclosed traumas throughout my life, began to hit the bottle a little hard as a coping mechanism, ended up coping with the mechanism.

It’s funny how immaterial the reasons were that caused (prompted? encouraged?) me to stop. Part of me kind of wishes I had more of a story, but I didn’t lead four cops on a low-speed chase through Amish country while swerving around horses and buggies, or punch someone at a karaoke bar for singing a Don Henley song (although they’d deserve it, Henley’s the worst). Someone at an AA meeting recently said, “Rock bottom doesn’t have to be something that happens to you, it can just be where you stop digging.” Ultimately, that’s what happened to me. That’s not so bad.

My brain is getting back to normal, giving me the happy-feely stuff it stopped making a while back, and I’ve been waking up feeling, what’s that word? Hungry. I’ve been waking up feeling hungry. But also I feel a renewed sense of purpose. My friend Emma (here comes the religious stuff again) was leading a Bible study for InterVarsity students a couple weekends ago, and I was allowed – that’s the word, somehow permitted – to sit in, and we grappled with this idea of “purpose,” something I’ve been struggling with for a while. She admitted that she does, too, though not in so many words, and it kind of shocked me because of how poised and confident she always seems, so sure of what she should be doing. It was a humbling reminder that it’s okay for me to feel a little unsettled, in a grey area, not complacent but still somehow comfortable with the in-between. I don’t take that for a lack of direction anymore, or a supplement to my depression – it’s just this simple thing called “being human.”

I might not be my buddy Andy, a doctor, who’s mulling buying some land and building a house, and who’s expecting his first child. I’m certainly not my pal John, a writer for a prestigious outlet who can spill ink onto a page with serious purpose and sociopolitical activism. I’m not Kristy or Josh or Jeremy, all of whom I’ve interviewed in this space, all of whom have some pretty incredible insight to share. But when I told my therapist about these personal misgivings, he asked (this guy, always with the questions) why I’m holding myself up to their lives, successes, careers, and standards – is there something wrong with being me? For the first time in a very long time, I can say no, actually, there’s kind of … not anything wrong with that at all.

So I’m not appreciably worse than anyone else, even those I look up to, but boy, did I do a ton of damage. I’m thoroughly freaked out about this whole “moral inventory” and “making amends” stuff that comes with AA. I’ve cut out early from events – Actual Fun Things – to make that 5:45 appointment with my liquor cabinet; I’ve missed out on bowling alleys and mini-golf and movies and concerts because I was afraid to leave my home and the comfort of a cheap plastic bottle. I’ve said things I didn’t nearly mean, ignored friends who were never but decent or better to me, and made a significant ass out of myself on an occasion or two (although I never got violent, even when confronted with Henley on karaoke night). I can’t count the cost, but I paid a few Hamiltons a week to make sure I stayed good and that way, and that grieves me.

But these past 19 days have been good. Really good. I’m continually impressed by life’s little mercies – the grocery shopping, Becky’s ministry events, those family gatherings, nights out with Diet Coke on the rocks, finishing that Redbox DVD (or not – I’m sorry we didn’t get to “Moana,” Becky, I was busy writing for once). I’ve even noticed that I’ve felt less cynical, less nihilistic, although my sense of humor still tends toward the absurd and I’ll probably still continue to confuse the hell out of our one friend. This is to say, I have a lot of work ahead of me. (I’ve been told that the 12 steps are transferable, and life has a way of saying “you actually have more defects of character than just the desire to drink,” but I haven’t even gotten my 30-day chip yet, so I guess it’s (F) bombs away for the time being until I decide to tackle my filthy mouth.)

I’m also beginning to realize that these so-called wasted years weren’t tossed into the rubbish bin, but the recycling container. The first dance at our wedding – look, I promise the Jesus stuff will be over soon, as well as these 2,000 words – was this song called “Beautiful Things” by a band called Gungor, with a chorus that goes:

Many hands have frozen into cramped claws unpacking heavy theological issues like atonement theory and the fall of humanity – and they’re just a few more people I can’t compete with. But if there’s a fundamental truth I believe about God, it’s that he truly makes all things new. Even me. And maybe there’s not a beginning or an end to any story at all – just an eternally churning in-between area where God keeps on working.

One thought on “Don Henley made me an alcoholic”